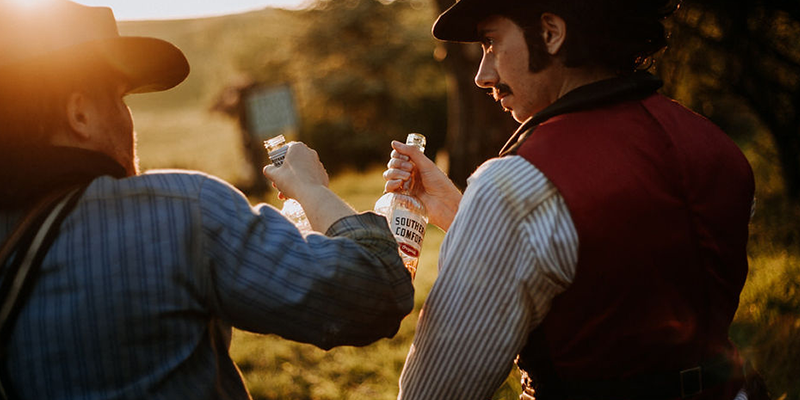 If I had to describe our cosplay year 2019 in one word, I’d pick: Surprisingly awesome.
Okay, that’s actually two words but you get what I mean. 😉

The surprising thing about it was that we didn’t even make that many costumes and I was convinced we would hardly have any time for our favourite hobby. And in many months, that was the case. Our lives were super busy as Pasta was working super hard as a wedding photographer and I had to work on my master’s thesis – which is usually a time of emotional crisis for any psychology student. It turned out way better than expected though and I’m proud to say it was managed with medium levels of crying so that’s that. However, when you hear the bone-wrenching call of duty from real life to get your sh*t together and some money on top cause the cats got to eat, there’s hardly any room left for ridiculously stressful hobbies such as cosplay. Or so we thought…
Because sometimes, when life gives you lemons, cosplay can add the spoonful of sugar to make it lemonade. You just have to know how and I think that our relationship to this hobby has taken a turn for the positive in these times.

As I already mentioned, we didn’t do so many new costumes in 2019.

Actually each of us just made two new costumes – so we made Arthur & Dutch from the videogame Red Dead Redemption 2 (RDR2) and Nero & V from the game Devil May Cry 5 (DMC5). 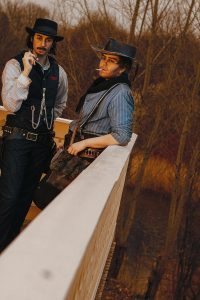 RDR2 certainly wasn’t a “love at first sight” videogame for us. Actually it was a game that Pasta played for about one hour before giving an annoyed huff and the criticism that “everyone is butt-ugly” and “I hate this game” before putting it aside and playing Assassin’s Creed Odyssey. And we also came up with the cosplay plans for Kassandra and Alkibiades before boredom made Pasta play RDR2 and it really started to grow on us. A lot. Like… a lot a lot. While protagonist Arthur Morgan’s rather rustic charme appealed to Pasta, I actually fell for the Mango Man and charismatic leader Dutch van der Linde.

We were very happy to have costumes where we can go all-in with the weathering and we also ended up underestimating those costumes completely. “Hah, that’s just fabric” and so on. We ended up using so many different techniques, from 3D-Printing for guns, buckles and spurs over leatherwork for the holsters up to casting bullets and making fat/musclesuits to wear under the costumes so the frame would match. It really cost us a lot of time, effort and nerves to finish these bad boys but when we first wore them to the bookfair in Leipzig, we noticed it was worth it, as we had so much fun with our cosplay group! Little did we know where these cosplays would go later on… 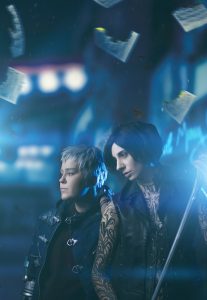 I’ve been such a huge fan of Devil May Cry, ever since I joined the fandom with part 3. Pasta? Not so much. Actually it was half adorable, half infuriating how she reacted to Devil May Cry 5 (“Why does he dance? Its embarrassing. I hate this man!”) and still, I could somehow talk her into cosplaying as Nero. And she tackled that project with all her crafting power, modelling Nero’s prothesis Overture, the revolver Blue Rose and the Red Queen sword! Since I was really short on time (as I mentioned – thesis hell) I bought the pants for V and had Pasta’s help with the cane as well as the skull chain. For the jacket I recycled that old leather duster I wore in high school to scare the other kids haha! So it was a very cost-effective cosplay. But without Pasta’s help, I could never have finished it. Also I developed a lot of anger towards those ludicrous tattoos.

A year in Contests

We participated in three contests in 2019!

At Animuc, we were proud to bring our cowboys – I mean outlaws of course – to life in a short silent movie skit at the C4 prelims. You can watch it here!
Given how many great contestants were participating, we were absolutely honored we got selected to go to the C4 finals in Rotterdam. Which was contest number 2 for us! We were absolutely lucky to have a darling like Tsuki with us as our organizer. She took such great care of us that we could enjoy our stay to the fullest and meet so many wonderful people! On stage, we performed a short skit on Arthur learning “the art of courtship” which also involved a fish. You can see our performance here!
We had the time of our lives at that event and when it was announced that we could take the Golden Cow home to Germany I think I lost my last braincells. 😉

The third contest was the Connichi Cosplay Contest in which we teamed up with our friend Symphonia as a Devil May Cry 5 group. It was so much fun to work with her and develop a skit that really managed to bring the insanity of a Devil May Cry game to stage. I still love our “exploding” cardboard van and I don’t think I ever had so much fun recording the audio for a skit. Also we somehow were super nervous to perform together because we could only practice twice. Behind the convention building with only a phone for sound. It sure was wild but it was also super fun. We didn’t place but we really really enjoyed performing together!

We got more into videomaking in 2019 – and by “we” I mean Pasta. This led to two more Cosplay Music Videos coming to life, mainly the “I Gave You All” CMV featuring Arthur and Dutch from RDR2 (and our dear friend Timetravellingprincess behind the camera) and “When The Party’s Over” featuring Nero and V. We also took many photos alongside those videoshoots and at convention. Once more, we have to thank our friend Timetravellingprincess for all those wonderful photos that show us together <3

Lord, Save Our Soles!

Welcome to our Store! Please marvel at our vast selection of products. Ausblenden